Recently I was going through family photos, transferring slides (anyone remember slides?) to a thumb drive, when I realized that I had been feeling the weight of bad memories, even though the good parts of my backstory far outweigh the bad. But it seems to be human nature for bad memories to crowd to the surface and block out the good.

When I was attending Vermont College of Fine Arts for my master’s degree in writing, students were required to attend 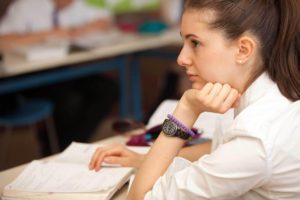 workshops where each of us took a turn having a chunk of our manuscript critiqued. When it was your turn, you weren’t allowed to talk or defend what you’d written; you just listened. Fortunately, we had been coached not only on how to give a critique but also on how to receive one. We were encouraged to record our session – on tape or in written notes – so we could go back later and remember the positive comments, because negative feedback tends to loom so large it makes us forget the positive.

I’ve been told that trauma does the same thing. One therapist says that traumatic experiences are like exploding bombs. Being bullied, listening to parents yell at each other, seeing Dad slam his fist into the bathroom door – it’s like a time and date stamp gets carved into stone at that moment, and the stone gets stuffed into our backpack as a souvenir.

Many of us try to ignore this baggage, to turn a blind eye and hike on ahead as if the weight weren’t there. But when the weight gets too heavy (or a friend does the TSA thing and asks, “Do you maybe have some stones in there?”), we can’t ignore it any longer. That’s our hint to take an open-eyed inventory of exactly what we’re trying to carry, at which point we have to make a 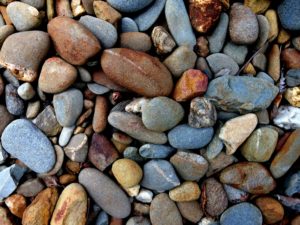 choice. We have several options. 1) We can hold on to the stones so that fellow travelers can see how unfortunate we are, being forced to carry this weight. 2) We can try to get fellow travelers to carry some of our weight. 3) We can step off the path and use the stones to build a protective wall that we can hide behind and not have to move forward. 4) We can lay the stones down as a pathway to a healthier future.

The Bible tells how the Israelites gathered stones when they crossed the Jordan into the Promised Land. On the other side of the river, they stacked the stones as a memorial commemorating how far they had come on their journey. Then they left those stones behind and moved on. (Joshua 4)

It’s much easier to travel light in life. It’s healthier. It’s part of becoming whole. So how do we lighten the load? One thing I know: we don’t lighten it by denying it’s there – like Igor in Young Frankenstein. When the doctor offered to do something about that hump on Igor’s back, Igor frowned. “Hump?” he asked. “What hump?”

When we’re ready to admit we have a hump and decide to get rid of the weight, what we actually leave behind is not the event. 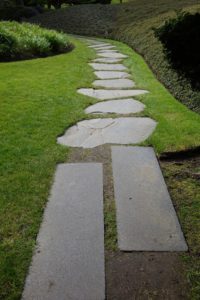 True, on a timeline, the event is in the past, so in a sense, we’ve left it behind. What’s done is done and can’t be undone. What we carry with us is the weight we’ve given the event, the pain or shame or fear that glommed onto that incident. That’s what we need to leave behind, because that’s what weighs us down – the burden of holding on to victimhood after the event is long gone. We carry that burden forward unless we deliberately deal with those stones.

My maternal grandfather left his first wife and young son to marry my grandmother. As a result, I had an uncle I never met, and my mother had an older half brother she hardly knew. A few years ago, Mother’s side of the family had a reunion and invited him. When he actually attended, Mother was overjoyed and introduced him around the room. Everyone tried to make him feel welcome. But the only thing he wanted to talk about was being abandoned by his father when he was a boy. Here he was, 80+ years old, still making himself the victim over something that had happened over 70 years before. Everyone wanted to shake some sense into him and say get over it already. Sure, what happened was wrong. Sure, it damaged lives and caused a good deal of pain. But clinging to the wrong and the hurt for years, even decades, only added weight to the burden. He ended up victimizing himself.

Of course, bad memories are as much a part of us as good memories, and they always will be. It’s the bitterness and shame that become the baggage we don’t need. Clinging to the wrongs of the past can blind us to our possibilities. It’s that weight we need to identify and jettison, maybe even stack like stones to memorialize the fact that this is where we’ve come so far – and then leave them behind. 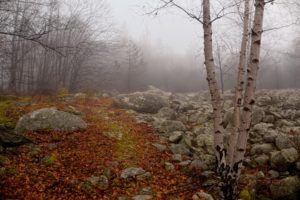 In a previous post, I referred to Jesus saying, “Take up your cross and follow me.” I pointed out that to take up our cross, we have to get down from it. It’s the place we suffered. But we can stop whining about it now. We don’t have to stay there. We can get down, pull that thing up, roots and all, and move on. All we carry forward are the scars. Everyone has them. That’s part of the journey. Scars are signs of victory, not victimhood. It’s not the scars but the weight of bitterness and shame that hold us back, the heaviness of viewing ourselves as victims.

Join me next week when we explore family micro-cultures and the weight we give experiences as we grow up. Until then, I wish you well on this unmapped journey.

If you want to me to send you a short, calming inspirational thought for the week each Sunday morning, you can sign up at Carry the Calm.