I’ve posted part of this story before, but it’s a good one to lead us into what I’ll be posting for the next couple of weeks about religion.

The rumbling, rocking train crosses the Nile Delta, heading north from Cairo to Alexandria. I’m traveling with a writer friend 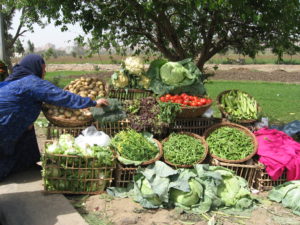 who is doing research for a novel set in early 20th century Egypt. Being a writer myself, I take notes. I never know when I’ll need that exact landscape or flavor or aroma in a story. We pass canals and irrigation ditches and, now and then, towns, each with several unfinished buildings, their top floors framed in posts with rebar sticking out like petrified smoke rising from gray concrete chimneys. (We learn that the buildings are in a perpetual unfinished state, because as soon as they’re finished, the owners must start paying taxes.) Speaking of smoke, smoking is allowed on the train, and it stings my nose.

No music on this train, only a cell phone ringing now and then, some with the same tones we have in the U.S., some with Arabic music. And, of course, there are the voices of people talking, which is musical in its own way. We rumble on past orange groves, a camel, egrets hunting on freshly-plowed fields, foremen on donkeys supervising field workers, bales of cotton in a huge yard behind guarded-gate walls, white ducks waddling down a narrow lane between buildings, field workers sitting on the ground eating lunch around a large galvanized tub that sits over a smoking fire . . . and then we’re in Alexandria. 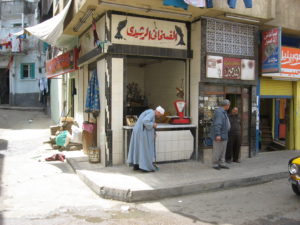 Alexandria looks more European than Cairo does. It’s widest from west to east, stretching along the coast of the Mediterranean Sea. Each day we walk from our hotel to a tram stop, board the women’s car, and ride west into the center of the city. From there we walk to locations we want to see, places that have been around since the 1920’s and 30’s. One is Eliyahu Hanavi, the only synagogue marked on our tourist map.

Even following the map, we almost miss the synagogue, because it’s behind a high wall. I just happen to look left as we pass a wrought iron gate, and there’s the building beyond a stone courtyard. The gate is closed, and the only people in view are the armed gate guards. We sigh. We’ve walked all this way, and the place is obviously closed to tourists. My friend raises her camera to at least get a picture through the bars of the gate. Immediately the guards protest. No pictures.

As she lowers her camera, I ask, “Is it ever open for tourists?”

“You want to go in?” ask the guards. When we say yes, they point us back the way we’ve come, telling us to speak to the guard at 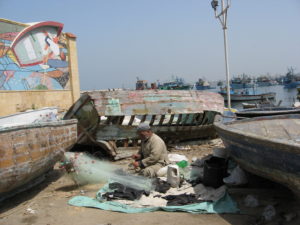 the first cross street. I noticed the guard when we first passed, thinking it strange that he sat behind a hefty wooden podium right in the middle of the crosswalk. We hike back to him and say we want to visit the synagogue. He hitches his thumb toward a man seated in a folding chair on the curb five yards farther down the street. “Tell him,” he says.

So we walk the five yards and tell him. He ushers us across the street to a gatehouse, where we explain ourselves to another guard, who then escorts us into the compound. A middle-aged darker-skinned man emerges from what looks like an administration building and asks for our passports. Now I hate to relinquish my passport to anyone, but no passport, no tour. He says he’ll return our passports at the end, so we hand them over and wait in the courtyard while he goes back into the admin building.

A few minutes later he reappears with a shuffling, bent old woman leaning on his arm. She’s neattly dressed in a gray jacket and dark skirt and wears her gray hair pulled severely back into a bun. Her name is Nina, she’s 83, and she speaks five languages: English, Arabic, French, Italian, and Greek. We choose a tour in the one language we know. 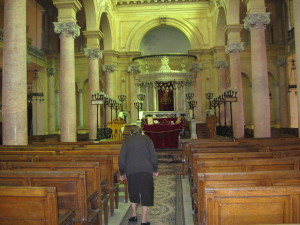 Our passport-holder unlocks the front door of the synagogue, and Nina leads us inside. It’s quiet. Cool. A gallery supported by beautiful marble columns looks down over the main floor where rows of dark wood benches with inscribed nameplates flank a center aisle. At the front of the room, dozens of silver lamps of varying shapes and sizes hang from the ceiling, although only one is lit. Nina says it’s the one original to the synagogue. The others came from all the Alexandrian synagogues that closed when the Jews were forced out. There are even more lamps in storage here, along with all the Torahs of those closed synagogues.

We ask Nina why she didn’t leave, and she explains that her husband couldn’t travel because of a heart condition. All those who stayed were old and dying. Only 25 Jews remain in Alexandria today, she says, but not enough men to have a service, even though this one synagogue is still open. “It is very sad, my dear,” she says. Then she asks, “Are you Jewish?” When I say I’m Christian, she says, “Is all the same. Only one God.”

Join me next week as I think about religion. Until then, I wish you well on this unmapped journey called life.